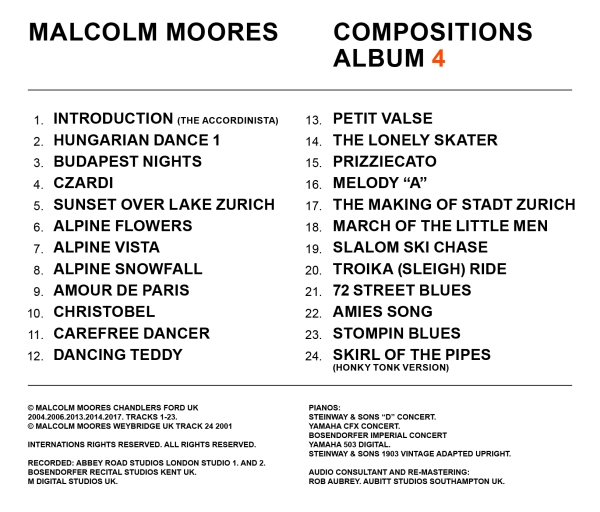 TRACK 1. INTRODUCTION (THE ACCORDINISTA). A shortened version of the composition  written for musette piano accordion, recorded on piano. The piano accordion being the first musical instrument I learnt to play when I was eight years old.

TRACK 4. CZARDI 1. One of two Czardas I have composed to date. The composition contains many changes in tempo but resists the very fast wild ending typifying traditional Hungarian Czardas.

TRACK 7. ALPINE VISTA. The high Alpine cattle pastures during the summer. The composition replicates the sound of tinkling cow bells against the mountain backdrop.

TRACK 8. ALPINE SNOWFALL. Experiencing snowfall in the high Alps standing under fir trees when there is no wind to disturb the falling snow. The composition ends as abruptly as the snowfall begins.

TRACK 9. AMOUR DE PARIS. With orchestral accompaniment. Paris as it is and always will be in my memory.

TRACK 11. CAREFREE DANCER. Partaking of refreshment on the terrace of a café located in the Neiderdorf Zurich a girl appeared from nowhere and gave an impromptu classic style dance in 2/4 tempo on the pavement in front of the café. I thought my luck had changed. But she completed her performance and vanished. Never the less her performance did complement the café and brandy and also gave me an idea for a composition.

TRACK 12. DANCING TEDDY. Music for a two-year-old dancing with her large Teddy Bear.

TRACK 14. THE LONELY SKATER. I visited an open air ice rink in Winter and witnessed a girl skater being instructed by her coach in the middle of the empty ice rink. The girl was constantly being instructed on her start routine which gave me the first four notes for my composition. I then developed the composition to supplement her skating programme which was undertaken without music accompaniment.

TRACK 15. PRIZZIECATO. A short semi-classical composition in valse tempo utilising high treble registers. The composition recorded on the Yamaha CFX demonstrates the CFX unique sound and technical accuracy. Listen to the bass interaction at the start of the composition.

TRACK 16. MELODY “A”. A short cascading composition I wrote to demonstrate the unique bass sound of the Yamaha CFX.

TRACK 18. MARCH OF THE LITTLE MEN. Originally entitled March Of The Gnomes. I got the idea for the composition after visiting a countryside restaurant/café in Switzerland which had many gnomes situated on the garden lawn arranged like an army of marching soldiers.

TRACK 19. SLALOM SKI CHASE. I witnessed in the high Alps during winter two competent skiers chasing each other downhill using the fir trees as slalom poles. It was a hell raising experience the dynamics of which I introduced to my composition.

TRACK 20. TROIKA (SLEIGH) RIDE. Children’s favourite winter ride. The composition replicates the sound of the Troika bells warning pedestrians and road users a Troika is approaching. The pauses in the composition replicate correcting the slewing of Troika when braking and cornering on the slippery surfaces, hence the need for the warning bells.

TRACK 21. 72 STREET BLUES. One of my favourite “Blues” compositions which was popular during the period I performed in “Night Clubs”. The composition ends in swing tempo.

TRACK 22. AMIES SONG. Amey was a professional “Night Club” singer who worked with her own pianist. Handy for me as I do not read music. I wrote this song for her.

TRACK 23. STOMPIN BLUES. This was a “Night Club” favourite. I use to perform many versions of the song. I got the title from a client who told me – That’s a stompin’ good piece of music.

TRACK 24. SKIRL OF THE PIPES (HONKY TONK VERSION) This is the tempo version of the composition originally written for Bagpipe ensemble and recorded at Abbey Road on their legendary 1903 adapted Steinway upright piano known as The Mrs Mills Piano. Together with the unique sound the piano makes – it is in perfect tune.

ADDITIONAL COMPOSITIONS NOT INCLUDED IN ALBUM 4.

TRACK 20. THE LONELY PIANO PLAYER. I put this composition together at the end of a Night Club engagement when all the clients had left. It’s a Blues tempo composition reflective upon the success of the evening.

TRACK 21 AMERICA 1. This composition is one of three comprising in tempo enharmonic close chord progressions depicting the energy and positive attitude of the American people.

TRACK 2. VALSE 2. One of many valse tempo compositions in classical genre.

TRACK 17. STROLIN. This composition depicts people relaxed and strolling down the street enjoying the environment. Composed in Blues tempo genre.

TRACK 20. AMERICA. 2. Another version of “AMERICA”. This time with a different ending to America 1.